I've got an art gallery show coming up that features some of my work. Mostly it's maps and stuff, but it'll be a good opportunity for sales and commissions. The theme is "Invasive Species," it will be shown in Orlando.

i remember when i could accomplish goals

also when i didn't suck at everything
Posted by Adam J. Thaxton at 9:31 PM 7 comments:

I know I'm late to the party, but Wonder Woman is great.

Basically, there's now two ways to salvage the DCEU, and one of them is to reveal we've actually been watching the Justice Lords universe this whole time.

The other is to let Patty Jenkins direct all the things from now on.

Every time Steve gets about halfway through something boundary-pushing that dudes usually do in a movie, he stops and backs off.

Diana starts the kissing, not Steve. Steve starts to start the kissing, but he stops and backs off and lets Diana take the initiative.

Thigh jiggling. I know that doesn't sound important, but Diana's thighs jiggle when she kicks things and hits things and sticks the superhero landing, as if they actually had fat and muscle inside them, that is not something that normally happens to women in a superhero movie.

The score is fantastic. Absolutely awesome. I'm adding parts of it to my workout music and to my OMS artwork music.
Posted by Adam J. Thaxton at 7:11 PM No comments:

I've started sitting myself down and forcing myself to do sketches. It hurts, but no more than any other writing. Hopefully, I'll have something soonish.

My plan is to just offer the chapters whole as a single download (obviously for free) rather than trying to keep up with a one-page-per-day schedule.
Posted by Adam J. Thaxton at 11:03 AM 13 comments: 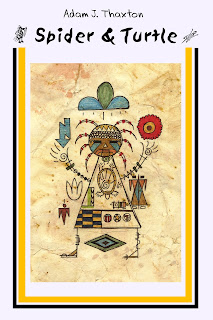 I'm real.
I exist.
I want to continue comics things.
I have a new book coming out.

Nothing else clever.
Posted by Adam J. Thaxton at 8:51 PM 4 comments: