A Book Cover is Fine

So, I got a look at how the cover for Ten-Ghost is looking, and it's looking like awesome. 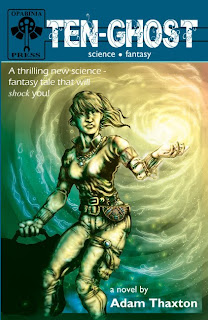 The point was to look like a period book as far as design scheme goes; I'm told it's also going to be aged in appearance before the final product gets done. The spine has the Opabinia logo at the top and that double bar pattern runs down the center, with a larger Opabinia on the back. It looks like something you'd see in a used bookstore in the bargain box, which, again, was the point of the thing.

As far as the content, I'm very happy with the way things turned out, except for one detail, which I fixed on the manuscript today. Otherwise, the whole thing is good to go, and I've been told that as soon as the whole cover with copy is turned in, it's going straight to print. There will be two more books after that; the second has a full outline and three chapters already, and the third has a vague outline.

...that means the sequel should be out sometime next decade.
Posted by Adam J. Thaxton at 3:48 PM 1 comment:

Weakness is Strength, Strength is Weakness

All too often I'll be researching or reading at leisure an article on how a mythos race thinks or a description of how its brain works, and the writer is intending for it to be creepy, mysterious, alien, and scary. Of course, it pretty much always is, usually pleasingly so, but will often come with a flaw in how the alien brain processes something we, as humans, would see as simple. We'll take Mi-go for example. The lore is that they think like computers; no human can beat a Mi-go for information processing or for task focus (or teamwork, considering how they break down tasks into constituent parts and assign them out). Once a Mi-go is set on a course of action, it's impossible to stop it or even comprehend the amount of concentration it's capable of dredging up. Humans don't do this, and realize the implications of new information rapidly (this is part of the reason humans go insane when exposed to mythos materials; they understand the true depths of it, and what reality they thought they knew is shattered before them). Imagine them as workers at a factory assembly line in which each worker assembles part of a widget; once they're locked on to the task, they don't ever look up, they don't stop, they don't question what they're doing and why. They just keep going. Until the conveyor belt stops. One Mi-go directing the task

However, this also means they can't make illogical leaps and have trouble thinking in abstract and metaphor, like a computer or an incredibly autistic kid. That is, they can't understand the implications of information or technology, and even go so far as to have assigned castes to break down specific aspects of something like this; Mi-go can't be generalists, for example. To a human, this is childish. And comedy gold. Here's a species that can't play tetris when first exposed to it and can be kept rapt by a “how to keep an idiot busy” keychain. If a Mi-go goes insane, it's probably killed or has its parts distributed among other Mi-go, just like how when you break a computer, you either change out parts entirely or get a new computer (or has a part replaced, which is more likely, given their predilection for body modification). Of course, writers and the lore started to immediately back away from this, handing out new powers, new abilities, just so that when they're caught in a situation that, by all rights, should make them break down just like a human would (even if it's a situation a human might find beneath his or her notice), they ignore it, too.

These weaknesses are terrifying in and of themselves; with the way that Mi-go brains work, it's unlikely that they will never figure out the way we tick, and indeed, will continue to specialize and focus and break down the tasks of vivisecting and analyzing humans, never becoming bored or frustrated or tired. They'll never learn to decide that doing so is useless. They'll just keep studying. Hitting walls they're unable to bypass, unable to even determine what the results of their tests mean, they won't become angry or jaded or upset at it, since they won't even be able to recognize they're not seeing the results. Forever. They might even one day forget why they're doing it, after becoming experts at the task. They will ruin your life, drive you mad, and eventually vivisect you, all for a purpose they've become so specialized at doing that it's lost all meaning.

Lovecraft even made his own creations victims of the cruelties of the world; the Elder Things in At the Mountains of Madness were even said to have gone insane and were undone when they sought out what they thought was refuge and found only death. That humanity would eventually understand and perhaps stand with or above these creatures was one of the great fears of these stories, summed up in the oft-repeated quote of the safety of a new dark age. That a human being can and should be able to puzzle out how an alien mind thinks and empathize with it, especially if that thing can't empathize back, should be the most terrifying thing of all.
Posted by Adam J. Thaxton at 3:49 PM 1 comment:

That Sound You Are Hearing

...is David's Cthulhu Mythos score going up and his max sanity going down. It's like playing limbo with your brain!
Posted by Adam J. Thaxton at 9:44 PM 13 comments: