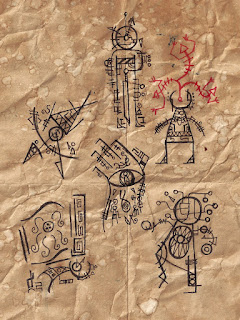 Spider-Shark is basically the manifestation of my ego. A giant rotting fish composed of slowly escaping, foul-smelling gas that is powering a clumsy robot.
Posted by Adam J. Thaxton at 10:57 AM 6 comments:

Lengthier list of projects with some descriptions. This isn't even everything - I'm also working on two pilots and a film script:

Sky Crossing
Fantasy series about a bunch of high school students drawn into a fantasy world – it's just that it's Ten-Ghost's world. Will be more traditional “fight bad guys, be awesome, has lots of tropes” type stuff. And character growth, obviously. One kid learns to un-learn his violent tendencies and to be a magician and gets to pal around with a crazy old man who is literally trying to outwit Death for a few more weeks (he wants to go on his own terms). One kid is turned into a local girl and discovers he's supposed to be joining a powerful family as the daughter of the matriarch – princess story, except the princess has no idea what the hell is going on. The girl who got picked up with him must come to terms with the idea that her role in this isn't pink and fluffy, and she needs to woman up and get an axe. One kid learns she is a spirit in human form – the ehskoojee – god-in-flesh, and must learn to reconcile that with her previously held beliefs, largely by teaching the boy – a griffin otherkin coming to terms with a challenge to his own beliefs – who got picked up with her how to use the scientific method on things.
Will span several volumes. Volume 1 complete and can be read, but needs heavy work.

Spider Series
Takes place in Aesca/Ten-Ghost's world. Coming of age literary shit.
Spider & Turtle: “You are not always in control, even of your own actions.” Ikasa Spider is awkward, selfish, dealing with anxiety and depression issues, and a teensy bit manic, but brilliant. Her family loses its magician store due to the ongoing depression and moves in with their grandmother in Fort Hammock. Ikasa inherits a turtle mummy that contains the Spider family's “greatest shame” and must deal with the issues it presents without losing herself in the process.

Spider & Alligator: “Hard work does not equal success.” Ikasa tries to work hard and be responsible to purchase a high-cost music player at the general store; fails.

Spider & Maize-Cutter: “Poverty doesn't teach people to be resourceful or thrifty – it only teaches them how to be poor.” Ikasa hooks up with the maize-cutters, another, alien sophont that lives in the jungles nearby the human settlements. She comes up with a money-making scheme selling them human cultural artifacts for gems and is eventually caught due to her carelessness with both selling and buying goods.

Spider & Stone Man: “You are your own worst.” Ikasa's money problems get her in trouble with a local gang, who chase her into the abandoned town shrouded in fog next to Fort Hammock. There she encounters the Stone Man, who, through violence and threats and emotional manipulation, keeps her there, digging in the ground for his lost finger. Ikasa must face herself to find the strength to escape.

Spider & Potter Wasp: “People change. You can find good people in the worst places.” Ikasa hooks up with an old friend from her childhood – Potter Wasp – doing work in a contested area outside the country. They do a bit of Peace Corps style stuff until they're captured and put to work in a camp, and Potter Wasp betrays her trust. Ikasa decides to help the insurgents due to intelligence reports she illegally read.

Spider & Ikasa: Ikasa goes to the planet Ikasa to face her destiny. Sword and planet, with literary stuff. Haven't decided yet.

Folk Devil: Ten-Ghost part the deuce, mandrake boogaloo. Ten-Ghost now has a sprog to watch after, who asks too many questions and thinks she is a horrible person (protip: she is). They become trapped in a town going down a spiral into quarantine and infection, and Ten-Ghost must uncover the source of the infection before the military steps in with flamethrowers and napalm.

Ascalon: Series of short stories about a perfectly normal girl who discovers she is a dragon – and that dragons must build people up and then horrifically break them in order to feed, and how she finds loopholes in the system.

BDO-Z (tentative name): Miniatures painter/model builder Claire is picked up by a massive space station/structure and must escape the machinations of Granule 2, as well as its winged minions. She travels through the station, meeting up with a mechanical armature missing its core memory and processor, a cyborg with horrible depression, and a member of a warrior culture who despises conflict, all in the hopes of finding a coder that can help her get home.

Thank You Notes to My Assassins: NEW AND EXPANDED
Posted by Adam J. Thaxton at 10:28 AM 4 comments:

A list of other things I'm working on right now.

Sky Crossing (series of chapters to be released on Kindle; fantasy)

Things are going slowly because I have the self-esteem of a rotten turd.
Posted by Adam J. Thaxton at 12:10 PM 6 comments: