Dear Sky-Touching Nightravens
Thank you for the nice assassin; was disappointed at first, moment where he appeared and had me tied to chair after I slept with archaeologist to get information in France, he was wearing nice suit. Thought he was going to torture me, but he struck up pleasant intelligent conversation and told me exactly why I had to be removed while slowly removing suit. Thought he might go for lowest common denominator once the pants came off. Was wearing little dog collar boxers and had a swastika tattoo on his left arm! Then said "and for some of us, that savagery is damnably hard to deal with" then shapeshifted into ten foot tall werewolf! Very classic, but also with nice twist! Nearly killed him with silver letter opener, he escaped out window with scar to his eye, hope to meet him again on zeppelin ride toward Himalayas where we will banter. Thumbed you again on RottenOmertas.

To: Shadow Demon Mafia
Did not like most recent succubus. Thank you for attempt anyway; I may swing both ways but I know a honeytrap when I see it. "Fiery death form" was still very sexy, and fight would have looked very cheesy to onlookers. Thumbed you down, but still looking forward to next time.

To: Ancient Serpent Cult
I don't know the name of your organization, but I'm very impressed with the way your cultists set a trap for me involving "friendly" village in need of rescue. The bit with the glowing motionless statues that yet followed me into the jungle was quite frightening and rather original. Nearly lost an arm! VERY impressed!

Dear Knife-Blackness Hand
I don't know who keeps putting you up to this, but your stealth assassins are incredible! Thank you for the most recent attempt which livened up an otherwise dull evening at the theater. I hate opera and it was very fun to throw knives back and forth in the kitchen, we shared a turkey and he tried to poison it a couple of times while I was watching. Very bold! And he looked amazing coated in oil. Right before I locked him into the steamer, anyway. As always, hug and kisses!

Dear Sky-Touching Nightravens
Brooklyn assassin in a fedora with the callsign "Two-Bit" and the ability to levitate a single 25-cent coin and fling it around rooms with the force of a high caliber bullet? AMAZING! Thank you so much for the experience! Also, I love the fruit basket. Checked it for bugs and poison, not a thing! Much love and kisses. Maybe some day we'll be forced to work together to prevent the world from being destroyed by a mistake from someone in your hierarchy, I look forward to your inevitable yet extremely classy betrayal (or your attempts to hire me! Kisses!).

Dear Black Star Crew
Please stop attacking my house. Actually called Sky-Touching Nightravens operative on the phone during the attack and we both complained about you while your assassin tried to kill me with minigun on the front lawn. Trying to kill me while in the bathtub, especially when I am not working on a case involving your organization shows no class at all and makes you seem desperate.

To: Ancient Serpent Cult
Normally I am not pleased with attacks on my home, but your attempts to recover the unearthly serpent totem from my home were very well orchestrated, that you recovered it without harming any of the books or other pieces in my conservatory impressed me heavily and I had trouble sleeping knowing that you could enter my home at any time and leave very little trace of your presence aside from telltale acidic stains which I recognized from the abandoned village where I had originally recovered the item. Well done, and I hope to uncover the mystery of your origin and purpose with time. Hugs and kisses!

Dear Black Star Crew
Thanks to my recovery of the Brisingamen and returning it to the Aesir, I have been granted a boon by these ancient beings and am now immune to all poison and venoms that would harm me in such a manner as to slay me. Please bear this in mind for future plans and stop killing my maids. Thank you.
Posted by Adam J. Thaxton at 9:26 PM 4 comments:

To: Knife-Blackness Hand
re: Assassin.
Thank you for the lovely assassin. He was very surprising and managed to jump me in the produce section. Very spontaneous! I loved it. XXOXX

Dear Silver Sun Syndicate
I wanted to thank you for the most recent assassination attempt. She was very cute and good natured, I had a wonderful time. Very skilled with throwing daggers! Went to casino and left almost the entire room in shambles. Very good upper body strength, too!

To: AI teh_CUBE3K
re: Assassination
I wanted to thank you for the terror-doll you sent to my private airplane island. It managed to destroy seven of my robot guardians before I was able to identify it as the culprit and burn it in the incinerator while I shrieked in pain due to broken limbs and damage to my face. Tore up one of my favorite shirts with its knife, and managed to kill supporting male friend who died in noble, masculine sacrifice. Two thumbs up!

Dear Black Star Crew
VERY dissapointed with last assassin. Poison in my wine was very old hat. Not like Silver Sun Syndicate old-school with class, but killing my maid and dressing in her clothes did not look right on your assassin, who was a fifty year old man. Please try better next time. Perhaps mind control gun? Looked at RottenOmertas, noticed you had 37% metarating. I am available for consultation.

Dear Sky-Touching Nightravens
Thank you very much for last assassination attempt! Assassin was very classy, attacked me on board an airship with henchmen, which I fought one-on-one, hand to hand. Struck up witty banter and had excellent clothing. Gold plated luger was exceptionally well-shined. I thumbed you on RottenOmertas, can't wait for next attempt!

To Nightmare Syndicate
Wanted to thank you for contract killer in plaid suit. Had a very 1970s vibe and hijacked my facility PA system to play disco while he hunted me through blackened corridors with straight razor. Managed to drive male support character right into my arms. A+, would be hunted again.

Getting Ready for Saturday Tabletops 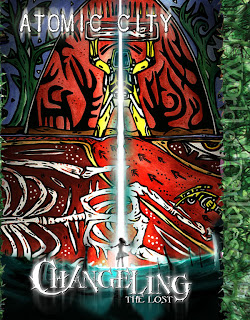 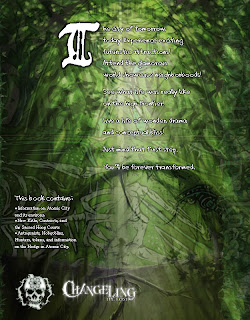 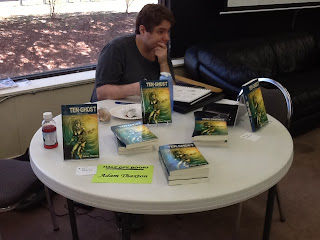 WHO IS THIS STRANGE BEING THAT THREATENS

WHAT POWERS DOES IT POSSESS

What Keeps me Busy

The world of Ten-Ghost, Sky Crossing, and Spider People! See those continents in the northwest section of the map? That's where those books all take place. This thing is huge, by the way. Warning.

I will also be signing copies of Ten-Ghost at Half Off books in Orange City, FL on March 16th from noon to three. I'm all excited. Also a little bit freaking out. Should be ok, though. It's a nice store, has that old-school library feel to it.