I've recently gotten into FATE and I think my favorite part about the whole system is Aspects and how easy they are to pretty much port over to any system that uses any kind of character resource. In D&D? They govern action points. New World of Darkness? Willpower or supernatural power sources. Mutants & Masterminds? This is a great use of Hero Points! It also struck me that scenes can have Aspects, and in Strands of Fate these can be either “always on,” such as a room that's always dark, or the slippery surface of an icy slope. There is, however, another use that slipped into my head while reading the books: settings having their own aspects. Allowing players to tag or compel setting aspects adds another layer of control and direction while still allowing the GM to retain some control over the direction of the plot. I think the next time I run a game in my novel setting, I'll use some measure of this. A player can compel the setting to react a certain way based upon presumptions given by the setting's aspects, or perhaps even tag them to get Fate points when participating in the genre.

For example, the setting I will be running will have the following aspects to start:

That's ten aspects, each one taggable to some degree by characters and to perhaps even be compelled. There's still a lot more work to be done regarding how it might be done, but it's a start. I'll talk about invoking or compelling these aspects in a later post, since it's just musing for now.
Posted by Adam J. Thaxton at 4:58 PM No comments:

Each teenager comes to the city of Agowatiha differently. Each sees it differently for the first time. Here is Matt's.

The road to the city was laid out like a carpet and the shuddering waves of maize were spectators desperate to take their photographs of the onrushing hulk of coiled rust and war stains splashed across its flanks like scattered hand prints. Escaping crows carrying along beside it like thundering soldiers of old, steel axes fresh in their hands, mounts like an avalanche beneath their hands, and the whorls of crawling time stood proudly resplendent on their bellies, to mark this day as the first charge of a long and trying conflict. The city was the enemy, a looming man with broad and thick shoulders that rubbed up against the sky. They had his back to the sea, though, and his defeat was certain to come, if not from the land, from the great storms Thunder would draw up from the waters Agowatiha could not watch.

The front line was already broken; the maize was winning, striking death blows through old and cracked concrete and marching through twisted metal skeletons, searching for holdout troops and covering them with leaves and stem until were stomped into dirt and ash, ground up to feed the new generation. The hungry generation. Matt spied a few of the more adventurous stalks already working their way into a nearby home, but the moment passed as quickly as they passed the front line. Among the trenches, soldiers had erected concrete barrier walls and paved the roads, removing dirt carefully so that the maize could find no purchase here, no matter how much it skulked right up to them. Farmers waited here in hovels constructed of scrap metal and old storefronts before the troops would send them out to mingle with and hopefully calm the attackers, to bring some diplomacy to those lawless killing fields.

Their car, unlike the car before them, went unmolested through the dilapidated district, past the shanty town and up further into the roads that could turn off onto the highways and bridges that rose into the core of the city, that tall and monolithic sentinel that gently touched the heavens and rested his elbows on clouds.
Posted by Adam J. Thaxton at 11:06 PM No comments: 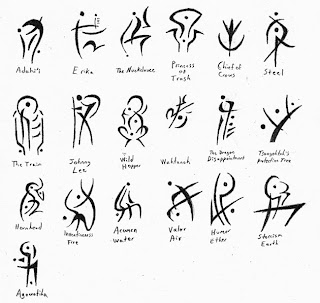 Some Nuwep symbols used in Sky Crossing. The traditional way to write these is with a shaved quill made from the tail feather from a bear/rootscraper (protip: I used pencil, like a fr00b). The interior of the feather uses a reservoir and the end is frayed, so the result is something resembling a stiff brush that you have to replace a lot.

While it's not spoken anymore, the letters and icons still remain, part of an ever-expanding symbolic lexicon adopted by the first thirteen tribes of the Confederacy during unification as a method of sending messages that the conquering Tourmek were unable to interpret.

Because of this, Nuwep encourages personal signs using a set of iconography stemming from the five virtues or five rivers. This is why Erika's seal, “the experimenting man,” bears a resemblance to the sign for inventiveness, “the crouched man at a cooking fire;” they both use the iconography for a working man. The sickle shape stands for a person's head. The sign for humor, for example, “the amused man,” is supposed to resemble a laughing person, while the stoic man is a person with broad shoulders touching their chin.
Posted by Adam J. Thaxton at 1:50 PM 1 comment:

Chapters to go? Not sure.
Posted by Adam J. Thaxton at 6:12 AM No comments: