Fire is the Monster's Enemy 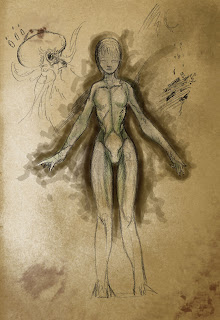 I said she looks weird in the novel... kinda. There are parts of her anatomy that just aren't relevant or that she pays attention to, and since the whole thing is third-limited, they don't come up.

She doesn't have nipples or primary sexual characteristics. Her bones are all wrong. If she puts clothes on it all looks normal. If she bleeds, it stops being blood once it hits the air away from her body, turning into dirt/rocks/sticks/acorns/junk you find if you dig in the dirt under a hangin' tree. She's covered in stitches from both herself and others. She has an autopsy Y scar. Her left arm is noticeably a little bigger than her right.

ALSO FIRE IS THE MONSTER'S ENEMY
Posted by Adam J. Thaxton at 12:22 PM No comments:

I Write on Sleeping Pills Sometimes

I am usually wrong. Here is an example.

“Your haven't scene this creed for my pokes, bow!” it spite, and look for the lair to try around the dray basic, snooping up morbid for the alligators. “I am your drought ton, again? You have cowed me, so do not complain about bringing your mighty fate!”

“You haven't seen the speed of my strikes, boy!” it spat, and took to the air to fly around the dry basin, scooping up mouthfuls of alligators. “I am your dragon, then! You have called me, so do not complain about what you think you might face!”
Posted by Adam J. Thaxton at 9:43 PM 2 comments: 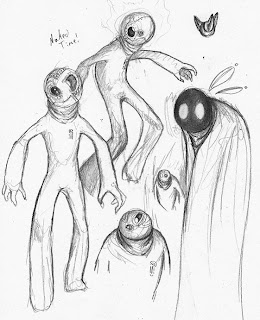 The race of Air who is said to have evolved solely from spirits, the Sky People resemble grayish white humanoid figures, having ankles but no feet, thick forearms with seemingly unfinished fingers, and a series of muscular folds for a neck. Their head is a round ball, dotted with symbols, with a single hole, inside which a blue light can be seen. They have a single eye, which is either human or reptilian; the muscular folds of their neck allow them to roll their head to angle the eye in any direction.

They have no mouth, and whisper through the blue light inside their hollow heads. They also feed through this "orifice," pressing food items into the light, where it's consumed as if by great heat. Much of the jewelry they wear appears to hang about them rather than on them. They are said to be Thunder's people, and live in his kingdom in the sky, which can be accessed through clouds; they can also pull metal from the clouds and shape it into tools and materials through processes that seem like human smelting.

Various ethnicities exist. They vary in height, weight, build, and over all color, from grey to white or soft blue. It's said that sky people can disguise themselves as human beings, and when they do, their voices buzz like speakers or bug lights. Three together can form a "foo fighter," a swiftly flying ball of light that allows them to quickly escape or travel from the ground to the sky.
Posted by Adam J. Thaxton at 12:54 AM No comments: